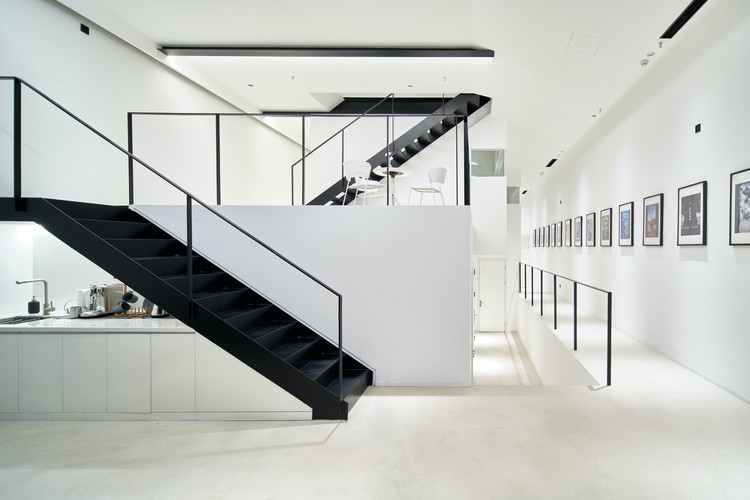 Text description provided by the architects. Climax Music Studio is a film music studio project designed by Endless Space Architects. The biggest feature of this project is to design a dynamic space in a regular pattern. The design focused on how to enlarge the space in a narrow and long site.

The idea that the designer wants to convey is that no matter how strong the functionality, even if it seems like a closed and inflected space, it is still possible to make the space flow by design.

Strategy
Due to the many functional rooms, the site will occupy a large part of the surface of the walkway. The design strategy here is to integrate a partially enlarged spatial sequence. The aisles at different levels are superimposed to expand it into an internal public space; Enlarged spaces are placed at both ends of the aisle, taking advantage of the time difference in people’s perception to alleviate the feeling of narrowness brought by narrow spaces.

The studio must increase the area per mezzanine to accommodate the many functional spaces required. Utilizes beam and sleeve space as much as possible. The steel beams of the original building are partially hidden. The exposed part of the steel beams reinforces the rhythm of the space and the structure turns into an expression of beauty. Digging ensures that the main functional space on the first floor has sufficient headroom.

Endless Space Architects has always emphasized that the lightest and thinnest building components can effectively solve functional problems. The mezzanine staircase is thin and light, giving more space to the living area. The walls of common recording studios are very heavy. By studying materials and details, the designer uses much thinner walls to meet acoustic requirements, leaving users with valuable width of space.