VScountry music artist Danni Leigh returns with their first new album in 15 years with the release of walk on a wire which will fall in June. Today Leigh released the official lyric video for the album’s first single, “My arms stay open late” which was written with country legend Melba Montgomery and the song’s intro features Montgomery in a candid recording of their co-writing session. “I wrote this song with my hero,” says Leigh. “I had a blast and this is probably my favorite writing session. I really appreciate the seriousness of her as a country music artist and songwriter and all that she has contributed to this genre. It was a special day for me and a writing session that I will never forget.

Pre-order walk on a wire HERE 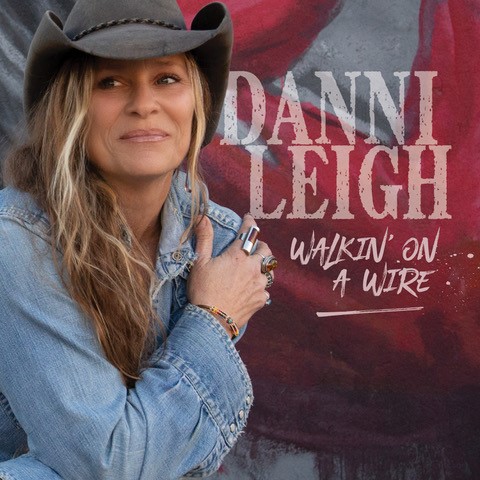 After a 15-year hiatus, country music veteran Danni Leigh come back on stage with walk on a wireavailable June 10 Going through BFD/Audium Nashville. Leigh co-wrote each of the 11 songs in her new collection, a diverse and emotionally satisfying sonic journey through love, loss and life’s most complicated moments.

There’s something particularly compelling about natural talent seasoned with life experience, and it’s this potent combination that makes veteran country singer Danni Leigh walk on a wire so listenable.

“It was 100% up to me what songs to put on this record,” Leigh says of the freedom she has in her new deal with Audium Nashville/BFD. “It’s a bit annoying, but I believe in all these songs and I’m 100% happy. They’re all my choices.

walk on a wire represents two important firsts for the Virginia native. “I’m the author of all the songs and this is a first,” she says with a smile. “It’s also the first time I’ve collected music with the band I’m playing with live. We added a few other musicians, but the basis of this recording is my guys in Europe. We started this recording there at the end of a bunch of gigs we did all over Europe. We ended this tour by going to a studio in a small town.

Leigh previously lived in Spain for five years, so it’s no surprise that she recruited top European musicians to craft her new project, including Dima Faustov, a Ukrainian saxophonist, who played on “You’re Gonna Lose Him”. “We texted to ask if he and his family were okay, and we didn’t expect to hear back from him,” she said, her voice shaking with emotion. “He texted back and said, ‘I’m safe. My family is safe, however, we are in an air raid shelter. He played this song in the bomb shelter for people and said, “Just a moment, we had a moment of peace where everyone around me was listening and it was amazing.” It’s so unimportant to what’s going on in his world right now, but we sent him and he was so happy we did.

Leigh and her husband, Mike McKenzie, put the finishing touches on the album at their home studio in Strasburg, Virginia. She and her family currently reside in Virginia’s Shenandoah Valley, where she grew up and began dreaming of a career that would take her music all over the world. “Growing up here, I was a bit rebellious. I was frank,” she said. “I was doing sports and I was in the band, but I was always singing. I grew up in the Lutheran church and sang in talent shows and in church with the choir.

Leigh’s striking looks and talent made her a natural fit for beauty pageants where she honed her musical skills and developed a natural ease in front of an audience. “I was always singing wherever I could. I moved out and started playing in bands and then ended up in the Artimus Pyle Band,” she says of touring with famed Lynyrd Skynyrd drummer. “I was 19 or 20 years old. I was a chorister and I danced on stage. It was amazing. Those were such good times.

Like many budding country artists, she moved to Nashville and landed a job as a waitress at the Bluebird Café. It ended up being a masterclass in songwriting as she soaked up performances from Music City’s top music makers. “I really learned a lot there, and I met Michael Knox, the guy who gave me my first shot and we’re still really good friends,” she says. “He signed me to a writer/artist deal at Warner Chappell Music and started getting me on sessions with writers who were very well established in the songwriting community. I learned a lot. I basically went to school.

This upbringing paid off and she began to get cut by artists like Tracy Byrd and landed her own recording contract with Decca Records, releasing singles such as “29 Nights” and “If the Jukebox Took Teardrops”. . Her time at Decca proved to be short-lived when the label closed, but Leigh later signed with Monument Records and continued to gain momentum with the singles “A Shot of Whiskey and a Prayer” and “Honey I Do”. A run on Audium yielded “Sometimes”, “House of Pain”, and “Last Train to San Antone”.

Marriage and the birth of her son changed her priorities, and it’s been over a decade since Leigh has been recording and releasing new music. walk on a wire marks Leigh’s return, and she’s excited about the songs in this new collection. “Steel Rails” is a rhythmic tribute to his grandfather that showcases the warmth and boldness of his distinctive voice. “I love that song. We wrote that one when we were in Spain,” she says. “In the second verse where I sing, ‘He grew old just believing that death would never find a raving man’ , this line is about my grandfather who drove a truck. He spent his whole life as a truck driver, racing down the road and when he got too old to haul he started escorting large loads. He was also a gypsy, so that’s sort of where it all starts. When I sing this verse, I see it.

Leigh says the title track feels appropriate for these turbulent times. “‘Walking On A Wire’ is a good picture of how I feel navigating the world right now,” she says. “That’s why I chose him for this record because it sounds like the pandemic and everything that’s going on in the world right now. The song itself is about a relationship that’s a bit difficult. I don’t don’t feel that for my husband, of course, it’s more like the visual of walking on a tightrope in the world really.

Years of honing her writing, performing and producing skills merge for Leigh with walk on a wire. “I also learned not to get too crazy,” she says with a hearty laugh. “Less is more and I think you hear that on this record. We haven’t accumulated a whole lot of stuff. The instruments breathe. They make poignant statements themselves. I’m not trying to over- singing anything or proving a point or being someone other than myself, and that’s what that is to me. I’m really proud of it. Hope you like it to people.”