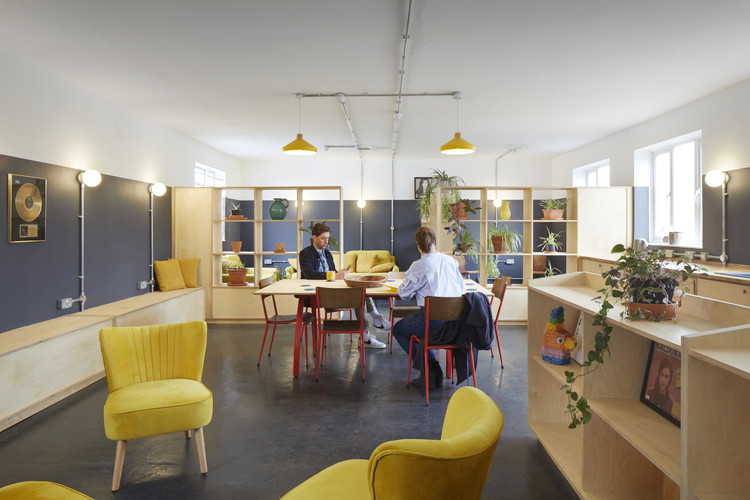 Text description provided by the architects. alma-nac has transformed a light industrial warehouse in Southwark into a state-of-the-art professional music studio complex for The Axis, a new venture specializing in providing writing and production space for music professionals.

The Axis on Ormside is the first installation created by The Axis, a London-based company with ambitions to create a national network of installations. It fills a gap in London’s cutting-edge music industry by providing acoustically designed songwriting and production studios and customer-facing facilities in a city suffering from a rapid loss of creative production spaces .

South Bermondsey is a prime location for the new venture: its post-industrial landscape has attracted a community of creatives drawn to its lower rents and open-plan lofts. Music production house Atomic Studios, which has recording facilities, is within walking distance on Ilderton Road.

Offering long-term rental and flexible daily subscription options, the 24/7 hub will be a space where users can settle in and create comfortably anytime, day or night. Studios are marketed to musicians who have established a reputation in the industry and need a more professional space to work and collaborate with others. Residents will benefit from being part of a larger community of notable creatives.

The Ax on Ormside occupies a two-storey brick warehouse on a former industrial estate, which has been vacant for some time. The warehouse has been transformed into a complex of ten soundproof studios arranged along an interior street. The smaller first floor features a Green Room – an open common space for client meetings, networking, socializing and relaxing – and space to accommodate music management staff who participate in songwriting sessions. songs. A small reception office is located on the ground floor to manage daily access; longer term renters will have keyless access using a mobile app.

Reflecting an artisanal aesthetic inspired by Enzo Mari’s low-tech Autoprogettazione approach, the studios are formed from utilitarian and inexpensive materials simply designed to create an inspiring and unique environment. The “street facing” side of the studios is made from CNC machined plywood cut so that there is no waste. The green room is furnished with reclaimed and high end furniture.

New transparent panels in the roof bring daylight to the interior street, and the roof trusses are illuminated at night to create a street atmosphere inside. Gillieron Scott Acoustic Design ensured that the studios were structurally isolated to maximize sound insulation between spaces and control intrusion from outside noise. As a result, internal noise levels will always be low enough for songwriting, regardless of whether others are working simultaneously. The internal finishes of each studio have been designed to control reverberation to industry standards, providing a high quality listening environment and creating a sense of privacy and enclosure, as well as a sense of being withdrawn from the outside world.

The color palette of bright, contrasting hues applied in the tessellation patterns is informed by the company’s branding, which was developed by Joana Pereira. A dark teal reference is applied to the interior along the street, with orange power trusses in the roof. Teal is also applied to the elevation of the font, which provides orientation and announces the Axis to the wider vicinity.